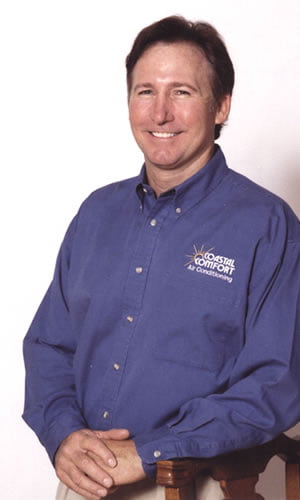 Tim’s family came from upstate New York where they have owned an apple orchard and dairy since the 1900’s. His father relocated to Oakland Park in 1940 and owned Oakland Park Auto Parts for many years. Tim was born at Broward General Hospital and is a true local in every sense of the word. He attended Northeast High and upon graduating, was drafted by the University of Georgia as the number one high school football draft pick in Broward County.

After having a knee injury, Tim returned to South Florida, anxious to start a career. The union school provided that. He met his partner, Tony Plastini, during that time. They attended school together, started job training and began working in the air conditioning field.

In 1985, Coastal Comfort was born. Today, with 35 trucks on the road, the company has grown from a small dream into a reality.

Tim and his wife Suzanne have four children, as well as four grandchildren. As an award winning fisherman, an avid hunter and snow skier, Tim is a true outdoorsman. You’ll find Tim at his happiest when he’s relaxing down in the Florida Keys, spending time with his family.